I am not asking why Christ had to die.  I am asking why he had to die on a cross.  To ask the question another way: could Christ have atoned for our sins through stoning or hanging or some other means of execution?

The answer is that an execution of any other means would give us no assurance that Christ has taken our curse for us.  Allow me to explain.

But in the gosp 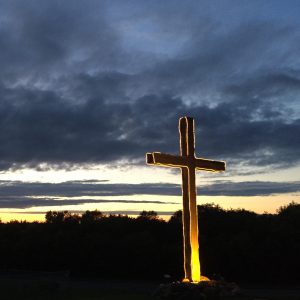 el the great reversal occurs: the cross becomes the curse.  The Scriptures make this clear: “cursed is everyone who hangs upon a tree” (Deut 21:23).

And in the New Testament, the Apostle Paul picks up this language in Deuteronomy and makes the connection to the cross of Christ.  He states that “Christ redeemed us from the law having become a curse for us” (Gal 3:13).

Q: “Is it significant that he was “crucified” instead of dying some other way?”

A: “Yes. By this I am assured that he took upon himself the curse which lay on me, since death of the cross was cursed by God.”

Christ’s death on a cross, then, gives us assurance that Christ truly did take the curse for us.  If you have embraced the gospel of Jesus Christ, believe with all your heart that the cruel execution of Jesus Christ on a cross is proof that God in Christ took your curse.